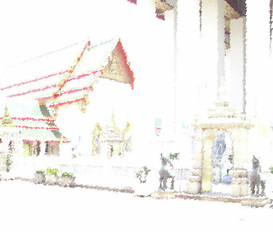 Though rarely remembered, Windsong was once the sweet voice of the Outlands. The town was formed one year before the River Queen's reign. At first this small camp was populated by only a few Aarhondeen immigrants, but more poured in each month.  After three years of growth, the town was a bustling community of hunters, gatherers, and craftsmen.  The townsfolk formed their own special culture characterized by lively music and elegant dance.  The peoples loved music so much that they would hang wind chimes from their roofs and whistles in the trees.  The wind would blow and the whole town would sing.

The Illustran Cleansing began and Windsong became a place of refuge for some Outlanders. For fear of detection, the Windsongeans took down their wind chimes and tree whistles. To avoid making themselves a target for the Illustran Cleansing Army, Windsong became silent. Even with the vocal chords of their culture cut off, they could not escape bloodshed and invasion.
Though the Time of Great Persecution neared its end, still, the fear of discovery drifted in the air.  Faithful to the lingering fear, Windsong was attacked by royal assassins from Pikcend. When the dust settled, several bodies lie lifeless in the dirt. By the next year, Windsong was abandoned. The chimes were never re-hung.